A RARE TRIP TO SPIDER ISLAND

"Spider Island is not recommended for weak hearts or high blood pressure -- too much laughter could be bad for them."

Near the top of the heap of the pantheon of "1 out of 4 stars" movies, HORRORS OF SPIDER ISLAND is the perfect trash film. Crude production and film quality, below-average acting, a couple of goofy looking spider monsters, a corny story contrived to exploit sexy women, and. . . sexy women, all combine for a romp in the innermost territories of sleaze. That the women are professional "entertainers" only emphasize the point.

The exploitative factor of putting a group of half-a-dozen hot babes on a deserted island was not apparently lost on at least one men's magazine. The July 1963 issue of HI-LIFE offered a 4-page vacation to Spider Island, all with tongue planted firmly in cheek. With lines like, "It's a hodgepodge of violence and sex that would slay Peter Lorre or Vincent Price, they'd die laughing", viewers are duly forewarned.

Filmed in Yugoslavia (now Croatia) and released in West Germany on 16 April 1960 as Ein Toter hing im Netz (A Corpse Hangs in the Web), it did not open in the U.S. until a limited run in March 1962 -- which may explain why the author of the article mentions that the movie hasn't been seen yet in the States. A re-release to a wider audience occurred in 1965. Where HI-LIFE got the stills and information about an even-then obscure eastern European horror flick is anybody's guess.

On a side note: the lead girl, Babs, is played by Austrian bombshell Barbara Valentin (credited as Barbara Valentine). Miss Valentin was known in her home country as "the European Jayne Mansfield", and further fanned the flames of fame by being a close friend of Queen's Freddie Mercury. 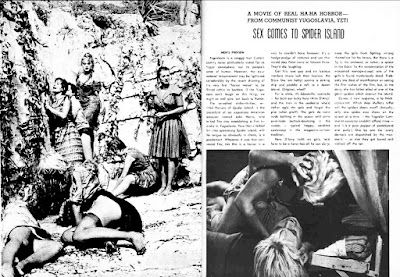 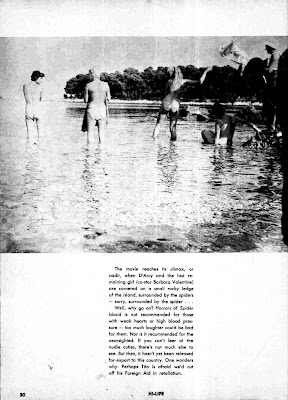 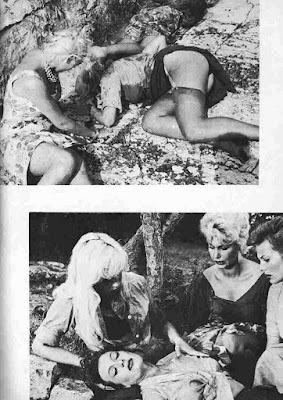 I almost passed this by while I was scrolling through this scan!