I thought it might be appropriate at this early stage of the game to fill you in on what you might expect to see in future installments of this blog. MONSTER MAGAZINE WORLD will concentrate mainly on what are generally known as "movie monster magazines". These include such vintage and out-of-print titles as CASTLE OF FRANKENSTEIN, MONSTER MANIA, MAD MONSTERS, and, of course, the legendary FAMOUS MONSTERS OF FILMLAND (soon to be resurrected to current status -- check previous blog!), and such current titles as MONSTERS FROM THE VAULT, RUE MORGUE, FILMFAX, and SCARY MONSTERS. All these magazines are recognizable as "film magazines" because they feature articles, photos, and information regarding horror, fantasy and sci-fi films. Some magazines such as Larry Ivie's vintage 'zine MONSTERS AND HEROES, feature both horror films and serials that were popular during the day. Some 'zines may contain short fiction and other text, and even a comic strip or other illustrated story or two. Still other 'zines, like Marvel Comics Group's 1973-1975 run of DRACULA LIVES!, are the "other way around" and contain mostly comic stories with maybe one or two articles about monster films.

The bottom line is I don't plan on holding on to any strict guidelines as to what is covered in this blog. The only thing you can be assured of is: if you enjoy the world of "monster magazines", then you'll love MONSTER MAGAZINE WORLD!
Posted by: John at 10:03 PM No comments:

The Return of the Son of Famous Monsters Strikes Back! 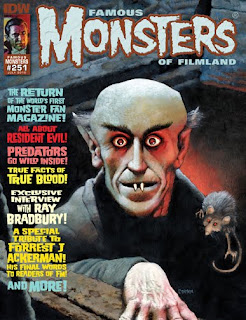 What better way to get this Blog rolling than with an announcement of absolutely monstrous and monumental proportions! How does "FAMOUS MONSTERS OF FILMLAND IS COMING BACK!"
sound, o' mavens of monsterdom? It's true, the venerable movie monster magazine begun way back in 1958 is returning once more to a newsstand or bookstore near you! So, who's responsible for this? I could say that it's everybody who has ever read and coveted each and every issue of Uncle Forry's FM as it came off the presses (nearly) every month back in the halcyon days of monster mags. After all, I'd like to think it's because of critters like us that anyone could ever conceive of spending their hard-earned greenbacks (or retirement plan) to resurrect the magazine that refuses to die! But it takes someone with the drive, grit, vision, savvy, chutzpah, cojones -- well, you know what I'm getting at -- to pull it off for the rest of us.

That man, and the mastermind behind this latest incarnation of said and aforementioned monster 'zine is none other than a fellow by the name of Philip Kim, who has, as Senior Editor, formed a partnership with established comics publisher, IDW (30 Days of Night). Looks like issue #251 will be hitting the stands this July (2010) after a pre-sale offering at the FAMOUS MONSTERS CONVENTION and an official release party at the SAN DIEGO COMIC CONVENTION. The all-new FM (although I think it would be a hilarious in-joke to include one of FJA's infamously numerous reprinted articles just for old time's sake) will be published on a quarterly basis and will be available through bookstores, comic shops and the official FM web page at Famous Monsters of Filmland.com.

So, do you think I wax too effusively? Methinks not! You see, ever since the tiff between Ray Ferry, the former owner of the rights to the title, and Forrest J. Ackerman (a topic which I may or may not discuss on this Blog at some time), fans of FM have been waiting patiently for a more stable and reliable approach to the publishing of their favorite monster 'zine. And, who knows? This time, Mr. Kim might just be the person to do it. Hired to helm the editor in chief's chores is Michael Heisler, a man with industry experience from such hallowed places as Marvel Entertainment. Mr. Heisler was gracious enough to provide the cover image that you see at the beginning of this post along with the approval to use it. Thanks, Michael, you're tops! While it's not by Gogos, I'll definitely take the painted renderings of Richard Corben, one of my personal favorite illustrators who also happens to be a WARREN PUBLISHING alumnus from the Golden Age. As for the content of the magazine, it's planned to be "updated for a modern audience", but will still contain all the elements that made FM great in the first place.

At the end of the day I have to admit, things do look promising, don't they? In the meantime, I'll be gnashing my canines and chomping at my rawhide chew toy in anticipation. Good luck, you guys . . . we're counting on you! Let's hope that the next issue of FM is truly the BEST ISSUE EVER!
Posted by: John at 4:19 PM No comments:

Hey, there! This is my first posting on this brand new Blog called MONSTER MAGAZINE WORLD. And, just what is MONSTER MAGAZINE WORLD all about you may ask? Well, it's all about -- you guessed it -- monster magazines, of course! Monster magazines are a pop culture phenomenon that have been around since the late 1950's, if you can believe that. Most monster fans and historians of monsterology (that's the study of monsters just so you know) agree that the very first periodical magazine about monsters -- and monster movies in particular -- that was ever published was FAMOUS MONSTERS OF FILMLAND. The inaugural issue went on sale in February of 1958 and wound up as an experiment that turned out amazingly successful for gentleman publisher James Warren and sci-fi writer, agent and Esperanto-speaking Forrest J. Ackerman.


As fate would have it, during the same period of time that Jim and Forry were putting the finishing touches on their brainchild, Screen Gems, a subsidiary of Columbia Pictures, was marketing a package of 52 Universal Pictures horror and mystery movies using the name SHOCK THEATER. Among the titles were such scream gems as Frankenstein, Dracula, The Mummy, and The Wolf Man. The whole horrific kit 'n caboodle was released on October, 1957, just mere months before the release of FAMOUS MONSTERS (that's the shortened version I'll be using for the FAMOUS MONSTERS OF FILMLAND title -- I think you understand why. You'll also see me use "FM". It'll mean the same thing). Whether or not SHOCK THEATER helped the ensuing initial sell-out of the first FM or FM fueled the fire for SHOCK THEATER will probably never be fully known. What mattered was that the monster craze hit the good 'ol US of A in a, well, monstrous way. After that, for many newly-born "monster kids", the world would never be the same!


So there you have it in a nutshell. After FM, the monster wave hit like a tsunami slap from Godzilla's tail. The flood gates were opened and scads of monster magazines began appearing on the newsstands (any of those left in your neighborhood, folks?) in attempts to capitalize on the craze. The aim of MONSTER MAGAZINE WORLD is to capture the history and essence of this amazing cultural phenomenon. Heck, I might even try and add a dash of verisimilitude to the mix, too! It's interesting to note that this phenom came about seemingly fresh on the heels of the infamous comic book controversy, where horror comics were indicted by society's moral watchdogs and forced to capitulate under their hand of "decency". Sound familiar?


So, it's very possible that the monster craze could have been a huge backlash to the supression of this "horrifying" material just a few years before. Let's face it, monster 'zines have not been without their critics all along. But one thing can't be denied and that's the impact that these magazines, along with the films that they have covered so fanatically within their pages, have been on popular culture and society as a whole. And, who knows what the future will bring? Monster magazines are still being published and enjoyed by an avid readership. While these might not be the haydays of the past, what comes around usually goes around, doesn't it? I'll keep my fingers crossed . . . all 12 of them!


There you have it, fellow monster kids and multitudes of the idly curious. I hope to make this Blog entertaining, informational, educational, most of all, FUN. You are more than welcome to come along for the midnight ride to Castle Dracula. And, if you feel so inclined, I'd be much obliged if you spent a couple of minutes to leave me a comment. In the meantime, as a certain horror hostess liked to proclaim: Unpleasant dreams! And careful not to step on that spider ... it might be Lon Chaney!