NO SHOCK THEATRE 'TILL YOU FINISH YOUR HOMEWORK!

Email ThisBlogThis!Share to TwitterShare to FacebookShare to Pinterest
Labels: HUMOR, MONSTERS TO LAUGH WITH, SHOCK 1958

This is the article that followed the Dave Cockrum Creature From the Black Lagoon illustration you saw in yesterday's MONSTER MAGAZINE WORLD post. It's from Marvel Comics' MONSTER MADNESS #3, published in 1972 and must be one of the "Fiendish New Feautures" seen emblazoned on the front cover.

Note should be made of the two authors as well. Allan Asherman was a writer of several DC Comics titles and went on to become the publisher's historian. Gary Gerani was the writer of FANTASTIC TELEVISION, and more recently the DEATH SHIP comic mini-series that explained what happened aboard the doomed ship Demeter on its voyage from Europe to England, carrying in its cargo hold the most famous vampire in history.

Email ThisBlogThis!Share to TwitterShare to FacebookShare to Pinterest
Labels: CREATURE FROM THE BLACK LAGOON, MONSTER MADNESS

Dave Cockrum was an American comic book artist and writer who is noted for his work on Marvel Comics' UNCANNY X-MEN (co-creating the Nightcrawler character) and DC Comics" LEGION OF SUPERHEROES. He also delved occasionally into the world of monsters, too, as this illustration is seen in Mavel's monster humor publication MONSTER MADNESS #3, published in 1973. A nice compliment to the Bill Everett Creature that I showed you some weeks ago.

EXTRA SPECIAL BONUS! CREATURE FEATURE STICKER!
Posted by: John at 1:53 AM No comments:

From 49-cents to $499.99, all in just 45+ years. The 1965 Addams Family Horror Make-Up Kit from Bayshore Industries, a subsidiary of Miner Industries. Safe, non-toxic and  "MADE WITH LANOLIN"! Actually, it looks like the original purchase price was only 39-cents, judging from the price sticker, still intact on the package.

The first pic is from eBay. The second pic shown is from a Tumblr collection.


[From CRACKED'S COLLECTOR'S EDITION MONSTERS, February 1983]
Posted by: John at 6:40 AM No comments:

Most film historians agree that the "Golden Age of Horror" began with the release of Universal Picture's DRACULA in 1931 (Gary D. Rhoades includes WHITE ZOMBIE) and ended in 1941 with THE WOLF MAN. Some will go so far as to say that the Golden Age's last gasp was as late as 1948 when the monster rally spoof, ABBOTT AND COSTELLO MEET FRANKENSTEIN was released. By that time, however, monster movies had been de-clawed and de-fanged to the point of being used primarily as comic relief in a dwindling market until the Atom Age began, and monsters assumed a more "modern" persona, being bred from the realm of reason with science and radiation instead of the world of superstition with Alchemy and natural forces.

In August 1957, Columbia Picture's Screen Gems Division released a 52-film package for television that included horror and mystery titles from Universal's past B-movie glory years. The package was called simply SHOCK! (SHOCK THEATRE was the title given to some of the TV stations that aired the films), and its release heralded the advent of the "Monster Craze" years. After that, as they say, the rest is history.

Welcome to another new feature here at MONSTER MAGAZINE WORLD. It's called MONSTER MOVIE WORLD and it is designed to cover those very things that monster movie magazines rely on for their life's blood -- monster movies! I've had a blogspot under this name for a while now and have found that it's a little too time consuming to run multiple blogs and to also have time for writing articles and books for other venues (more about that later). As a result, with the exception of something unusual or that I find especially interesting, I will be retiring the MONSTER MOVIE WORLD blog.

So, now on weekends, I'll be covering monster movies and horror films as the primary content for MONSTER MAGAZINE WORLD. Material will vary from reviews, to clippings, to videos, but the focus will be on monster movies, both old and new, and from all over the world.

A NOTE TO FILM PRODUCERS, DISTRIBUTORS, MARKETERS: If you have a movie that you'd like to have covered at MONSTER MOVIE WORLD, please get in touch with me HERE, and I will let you know more.

In the meantime, for today I've added a few pages from the original SHOCK! film package promotional book. It was a comb-bound publication that promoted the package and provided information on each movie that was offered.

I hope you like this new feature. As always, you are welcome to comment and let me know. Have a great weekend, monster lovers!


NOTE: SHOCK THEATRE is a blog that covers the history of this historical event. Check it out from the link on the sidebar to the right of this blogroll.
Posted by: John at 11:46 AM 1 comment: 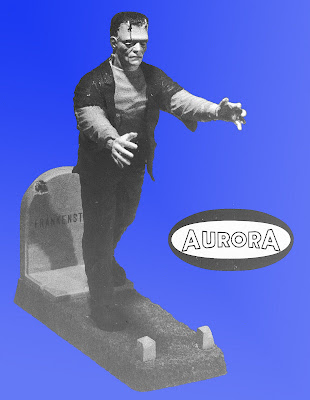 Something astonishing met readers' eyes as they devoured the 18th issue of FAMOUS MONSTERS OF FILMLAND in July of 1962. For only $1.00 plus 35-cents, you could send to CAPTAIN COMPANY, that Warren House of Monster Goodies, for a Frankenstein Monster "All Plastic Assembly Kit"! Suddenly, the ultimate monster kid's dream was within reach. The thought of being able to build your very own movie monster model was almost unthinkable.


If memory serves me correctly, my first model was another by Aurora -- The Red Knight of Vienna. Building this showed me that I had at least the fundamental aptitude to stick a few pieces of plastic together with some brain-bending stuff in a tube called model glue. This was of course in the days when all your model making materials were still OTC.

My first monster model, on the other hand, was The Mummy. I'll be sharing that lively experience with you sometime later.

Aurora's Frankenstein Monster, the first in a series, was introduced in 1961, which made the product barely a year old when it found its place among the monster masks, 8mm movie film reels and giant balloons in the back pages of FM. The kit became so popular, the Aurora plant was cranking out kits 24/7. It was later joined by others in the line and it would be a long time before they disappeared from the CAPTAIN COMPANY inventory.

Following is a bit of personal monster kid history as I share with you now the box top and the instruction sheet from the original Aurora Frankenstein monster model kit that I built (probably sometime around 1965). Somehow, I managed to hang on to them for all these years. I think the fact that I cut off the sides of the box enabling it to be saved flat had a lot to do with it. 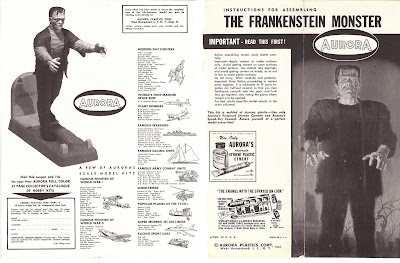 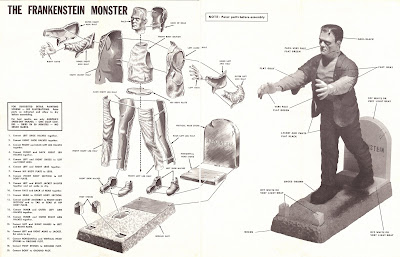 THE DEPT. OF MONSTER REDUNDANCY DEPT.

And, it was not totally unheard of to see the cross-pollinating of gags used in monster trading cards with a similar line found in monster magazine humor.

Take the following example as an example . . .

YOU CAN'T KEEP A GOOD MONSTER GAG DOWN

Doing much to prove that you can't have too much of a good thing, the Marvel Comics magazine group was unabashed by using a gagline more than once in their monster humor titles. This was proven time and again that one apparently cannot keep a good monster laugh down.


While the most used schtick in this series of titles was spoofing popular household products and their advertising catch-phrases (I'll be sharing some of those with you all in a future post), it is still interesting to see that similar, and outright copied, gaglines were used far more frequently than the casual reader might suspect.


The examples shown below are from MONSTERS TO LAUGH WITH (1964), which became MONSTERS UNLIMITED with Issue #4 (1965), and was resurrected as MONSTER MADNESS in 1972.