As of right now, no responses have come in with the correct answer to the MYSTERY PHOTO contest shown in yesterday's post.

If you've got an idea as to who the actor is in the photo and what movie he is in, send along your guess by using the contact form to the Mysterious Mansion on the sidebar to your right. If you're the first one with the correct answer, I'll send you a brand-new, unopened CD soundtrack of the terror from the tropics, MAD DOCTOR OF BLOOD ISLAND -- donated by Monster Kid and VIDEOSCOPE reviewer (and occasional MMW SOUND OF HORROR guest-poster) extraordinaire, Tim Ferrante!

One caveat -- I'll send this only to mailing addresses in the U.S and Canada.

Have a great and ghoulish weekend, monster lovers!
Posted by: John at 12:23 PM 2 comments: 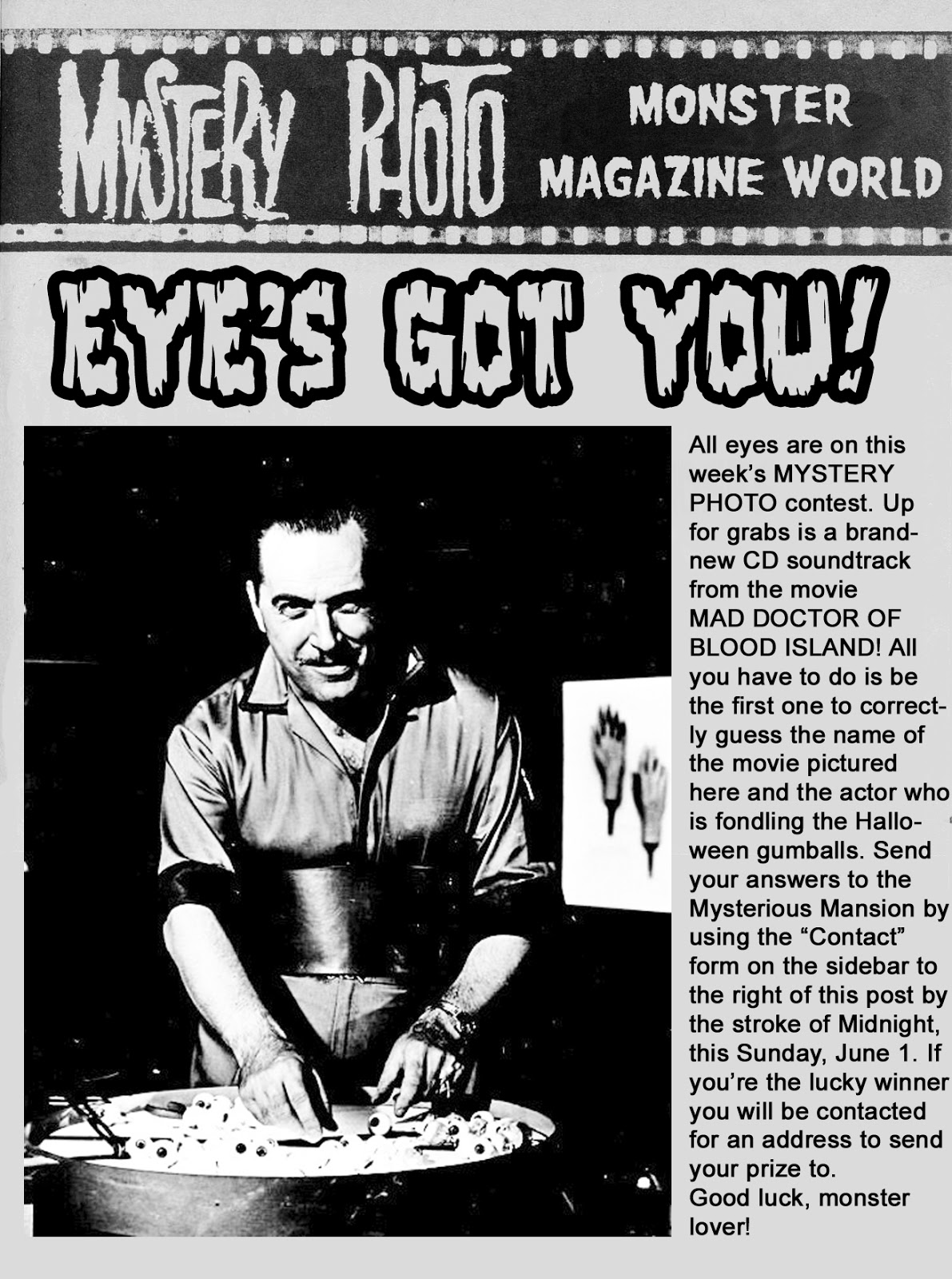 FINE PRINT SECTION: Only one (1) prize is offered for this contest. Contest is open until one (1) winner is selected or until midnight Sunday, June 1, 2014, whichever comes first. The winner is eligible to receive the described prize on the condition that he/she, when notified that they have won, provides a valid U.S. mailing address to send the prize. If the winner does not respond within 24 hours of notification, then they will loose their eligibility and the prize will go to the next winner with a correct answer. The prize can only be sent to U.S. mailing addresses. Postage will be paid by MONSTER MAGAZINE WORLD. The owner of this blog has the right to cancel this contest at any time.
Posted by: John at 12:00 AM 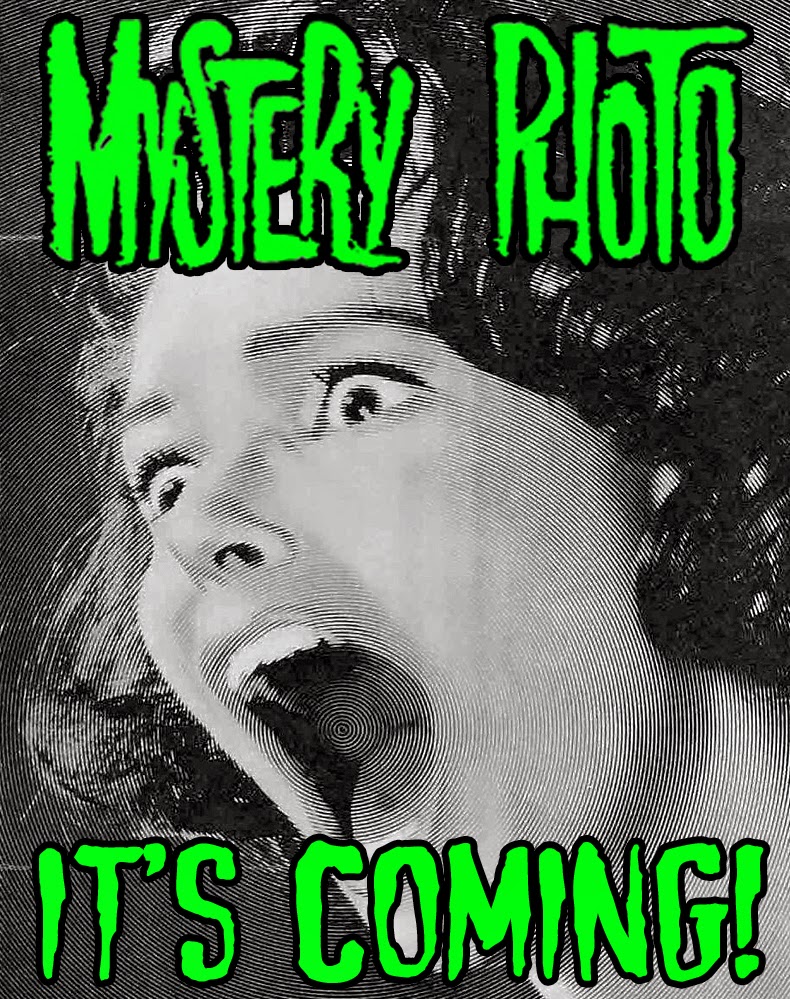 MONSTERS FROM THE VAULT NO. 33 DUE SOON 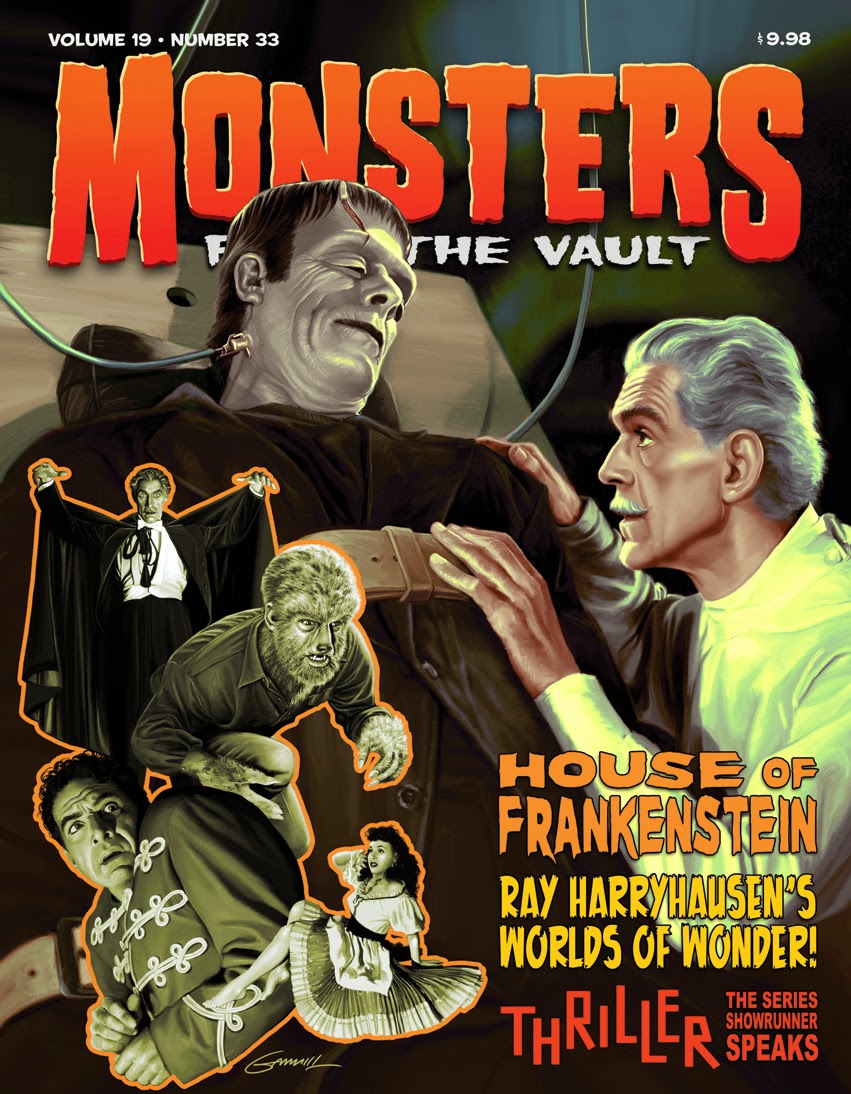 Jim Clatterbaugh's top-notch classic horror film 'zine, Monsters From the Vault has a "due in May" notice on his website, but it looks like it might be delayed once again since its original February release notice.

Hey, you can't rush perfection, I say. Any issue is well worth the wait.

In the meantime, you can check HERE for updates.
Posted by: John at 9:54 AM No comments:

Email ThisBlogThis!Share to TwitterShare to FacebookShare to Pinterest
Labels: MONSTERS FROM THE VAULT 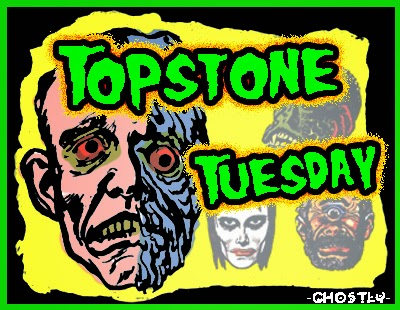 IF LON CHANEY COULD SPEAK 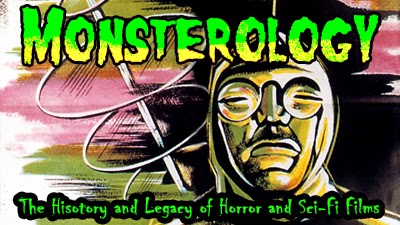 Lon Chaney Sr. spent the last years of his career -- and his life -- under contract with Metro-Goldwyn-Mayer, but not before the scrappy and resilient Universal had him to star in The Hunchback of Notre Dame (1923) and The Phantom of the Opera (1925). With perhaps the only exception being MGM's Tell It To the Marines (1926), Chaney's Quasimodo and Erik were the characters in his two most popular and enduring films.

Having worked for a rival (and much more prestigious and financially robust) studio did not stop Universal from laying claim to his famous name to promote their own productions, "B" that as they may. Chaney was coveted by Junior Laemmle for the leading role in Universal's now-legendary Dracula after starring in his first, not-so-legendary, talkie for MGM, The Unholy Three, in 1930. Unfortunately, The Grim Reaper intervened and Chaney would be dead by the end of August of the year.

File under "What Were They Thinking?", in an issue of their company's promotional magazine, Universal Weekly, ran a two-page ad, presumably written by a company executive (and possibly Laemmle himself) of the most curious kind. Headed with the title, "If Lon Chaney Could Speak", it was a send-up of three Karloff vehicles, Frankenstein, The Old Dark House, and The Mummy, advocating Karloff's acting prowess (and fan appeal) by presenting it in the perspective of Chaney's first-person voice. While Chaney might have indeed approved of Karloff's accomplishments (helped a great deal by Jack P. Pierce's makeup artistry), the editors for Universal Weekly certainly took liberties with Chaney's assumption of opinion. To add a bit of the morbid to the ironic, the ad appeared in the Weekly's November 19, 1932 issue, just before The Mummy was slated for release, and two years after Chaney had passed away from a throat hemorrhage. 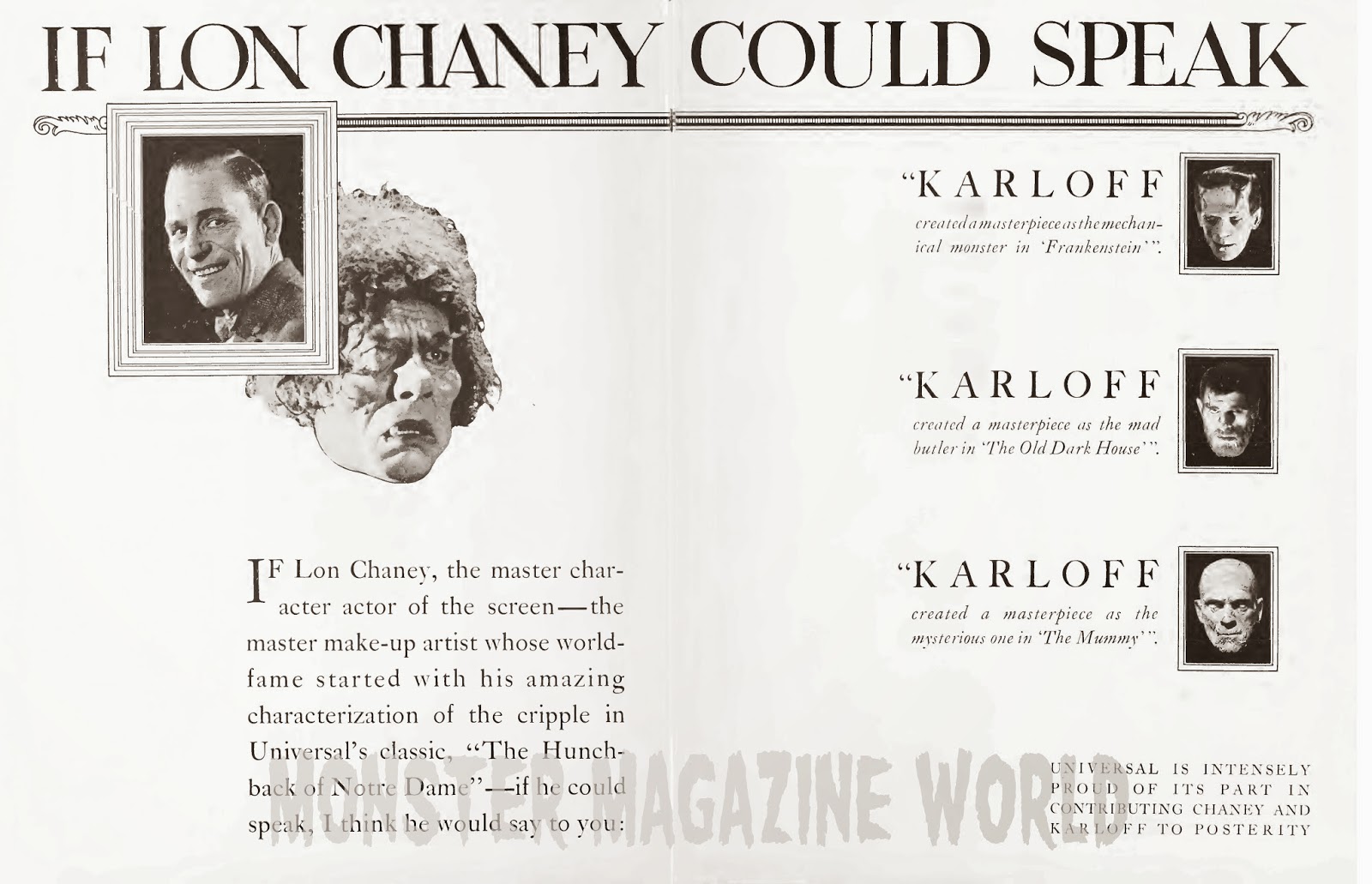 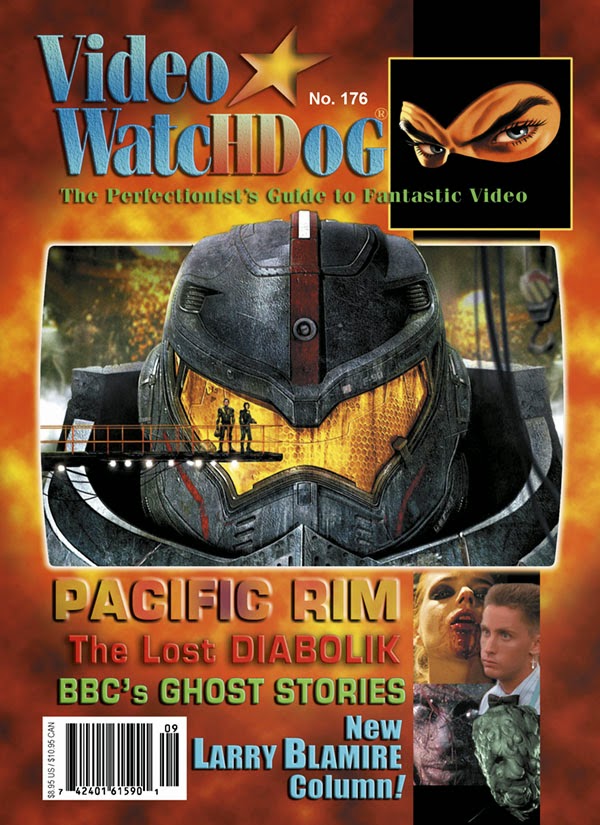 After a few months hiatus, the still digest-sized VIDEO WATCHDOG is back on the stands. A new addition among the star-studded cast of regular and staff writers is indie filmmaker Larry Blamire's column. If you like your monster movie reviews crisp, astute, with just the right touch of OCD technical tidbits for the hardcore videophile, then VW's the 'zine for you.
Posted by: John at 3:00 AM No comments: 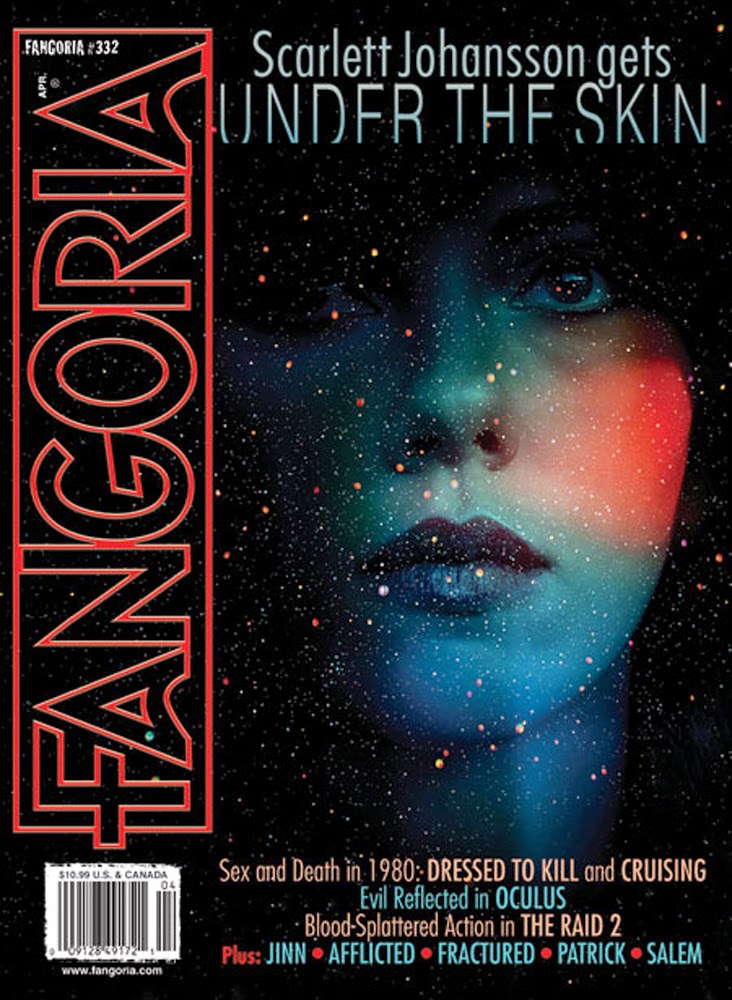 Uberbabe Scarlet Johansson is featured in the latest FANGO-fare. Here's the 411 on another issue chock-full o' monster goodness!
Scarlett Johansson plays an alien seductress preying on men in the new UNDER THE SKIN, but this is more a study of immersive dread than a flesh-and-blood-fest, leading us to go for a more ethereal up-front image heralding director Jonathan Glazer’s in-depth conversation about his one-of-a-kind film. Lots of other terrific spring films are covered as well: We’ve got interviews with directors Mike Flanagan on OCULUS, Gareth Evans on THE RAID 2: BERANDAL, Zack Parker on PROXY, Ben Wheatley on A FIELD IN ENGLAND and Adam Gierasch on FRACTURED, plus writer/director/stars Clif Prowse and Derek Lee on AFFLICTED; a preview of the witchy new TV series SALEM; Nancy Allen and Keith Gordon recalling their time starring in Brian De Palma’s DRESSED TO KILL; an essay on the controversial William Friedkin thriller CRUISING; and much more. Head down past the cover for the full details, and click here for more info!
GUTS
INTERVIEW: NANCY ALLEN & KEITH GORDON They joined forces to track down a maniac who was “Dressed to Kill.”
FEATURE: “CRUISING” In the midst of the early-’80s slasher trend, William Friedkin made a very different kind of murder movie.
PREVIEW: “OCULUS” Gaze into the mirror at the center of Mike Flanagan’s creepfest, and you won’t like what looks back.
PREVIEW: “PROXY” Indie auteur Zack Parker explores many different kinds of psychological trauma. Plus: actress Kristina Klebe on her dangerous love.
PREVIEW: “AFFLICTED” See the world and scream in fear with Clif Prowse and Derek Lee’s travel-terror opus.
PREVIEW: “COUNTDOWN” Get the straight dope on the Thai shocker from its vivid villain, David Asavanond.
PREVIEW: “SALEM” Witch new horror TV show should you watch? Creator Adam Simon explains why it should be his.
MINIFEATURE: “FROM DUSK TILL DAWN: THE SERIES” Robert Rodriguez reveals how he’s bringing his Mayan vampires to the tube.
FEATURE: “BATES MOTEL” There are more shocking developments in the second season for fans to go psycho over.
PREVIEW: “UNDER THE SKIN” Scarlett Johansson as an alien seductress? Jonathan Glazer’s film isn’t quite what you’d expect.
ON SET: “PATRICK: EVIL AWAKENS” Director Mark Hartley explains why and how he gave the Aussie classic another spin.
PREVIEW: “JINN” Letting ancient secrets out of the bottle, Ajmal Zaheer Ahmad tempts cinematic fate.
MINIFEATURE: “DEATH SPA” Gorgon Video resurrects for the Blu-ray age with an exercise in over-the-top bloodshed.
MINIFEATURE: “FRIGHT SHOW” The Fango-affiliated VHS anthology combined four frightful fan flicks.
PREVIEW: “FRACTURED” Adam Gierasch and Jace Anderson’s shocker really gets into its characters’ heads.
PICTORIAL: ASHLYNN YENNIE Part of our Fango/ GOREZONE photo showcase for the sexy “Fractured” and “Human Centipede” star.
PREVIEW: “JOHNNY GHOST” A particular spirit of rock ’n’ roll haunts the heroine of Donna McRae’s film.
MINIFEATURE: “THE MIDNIGHT MEAT TRAIN” Clive Barker’s classic tale is on track for a stunning new showcase.
FEATURE: “A FIELD IN ENGLAND” British sensation Ben Wheatley presents a surreal history of violence.
PREVIEW: “THE RAID 2: BERANDAL” The story sprawls and bodies fall as Gareth Evans returns to the scene of the crime.
GRAVY
FIRST RITES  Why this is a “Skin” mag
POSTAL ZONE Fantastic Friedkin and an amazing “Spider!”
MONSTER INVASION Previews of “Smothered,” “The Hanover House,” “Fool’s Day” and “Clawing!”
MONSTER OF THE MONTH “Space Girl” from “Lifeforce”
THE VIDEO EYE OF DR. CYCLOPS  Reviews of “Dead Kids,” “Odd Thomas,” “In Fear” and others
NIGHTMARE LIBRARY Reviews of Aaron Christensen’s “Hidden Horror” and Daniel Levine’s “Hyde”
DUMP BIN DIARIES Shout! Factory’s “All Night Horror Marathon Volume Two”
Posted by: John at 3:00 AM No comments:

LITTLE SHOPPE OF HORRORS NO. 32 DUE THIS MONTH


Editor and Publisher Richard "The Klem" Klemensen has announced that LITTLE SHOPPE OF HORRORS #32 is due out this month. Featured this issue is Hammer's LEGEND OF THE SEVEN GOLDEN VAMPIRES, a favorite among Kung Fu fans and horror film aficionados alike. Visit the WEBSITE for a complete list of the contents and ordering information.

NOT SO MYSTERIOUS PHOTO

Unfortunately, there was a bit of a glitch with the Mystery Photo Contest. The answer (FLESH AND FANTASY) was revealed early on in the comments section of the post. Comments should have been turned off to prevent this, but ....

As a result, this edition of Mystery Photo will be disqualified from a winner. I'll post up a new photo in a week or two.f 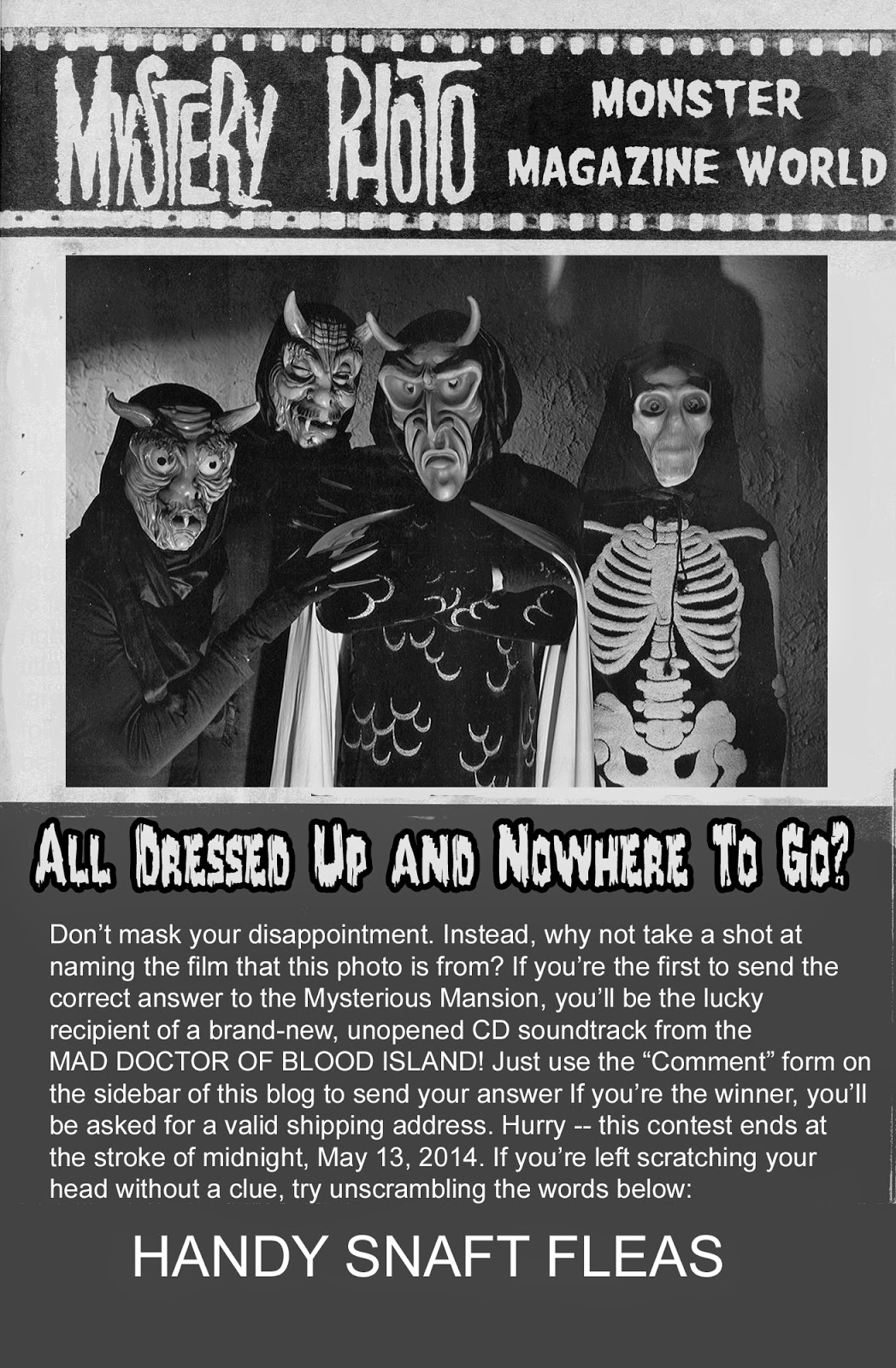 Use the "Send A Note" form on the sidebar for your answer.
Posted by: John at 1:57 PM 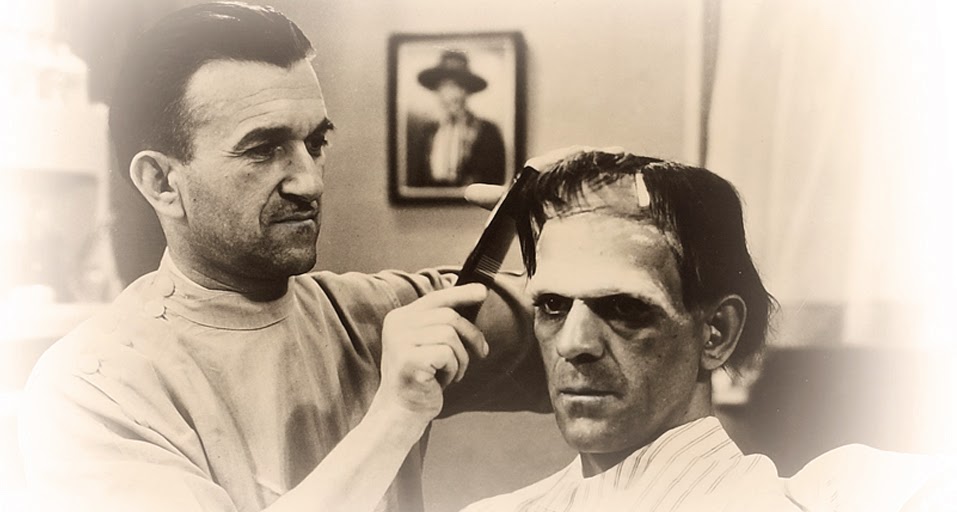