THE COMING OF (KING-SIZE) CONAN 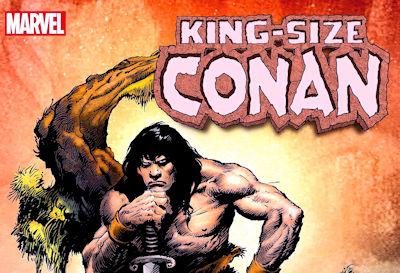 MARVEL COMICS IS CELEBRATING the 50th Anniversary of its CONAN THE BARBARIAN franchise with an oversize special edition comic due out later in December of this year. With a combination of both new and old stories and art, it promises to be as spectacular as it sounds. If you are unfamiliar with "Conan of the Comics", now's your chance to hop on board the slave galley to Hyboria, by Crom! Available from your local comics retailer.
Official announcements by the folks at the Mighty Marvel:
Pay Tribute to the 50 Year Legacy of Conan with 'King-Size Conan' This December
Discover the creators joining Roy Thomas in celebrating Conan's monumental comic book legacy!
Last year marked Conan's triumphant return to Marvel Comics, and now this coming December, we celebrate his 50-year legacy with the anniversary special KING-SIZE CONAN #1.
As revealed to Newsarama, writer Roy Thomas penned CONAN THE BARBARIAN #1 back in 1970, writing 115 consecutive issues out of the 650 CONAN issues at Marvel from 1970 to 2000, and now returns to the fold with KING-SIZE CONAN #1. Thomas is paired with artist Steve McNiven in one of the five tales featured in this oversized anniversary special.
The other creative teams tackling the remaining four stories include Kurt Busiek and Pete Woods, Chris Claremont and Roberto de la Torre, Steven S. DeKnight and Jesús Saiz, and Kevin Eastman tackling both writing and art duties for one of the tales. 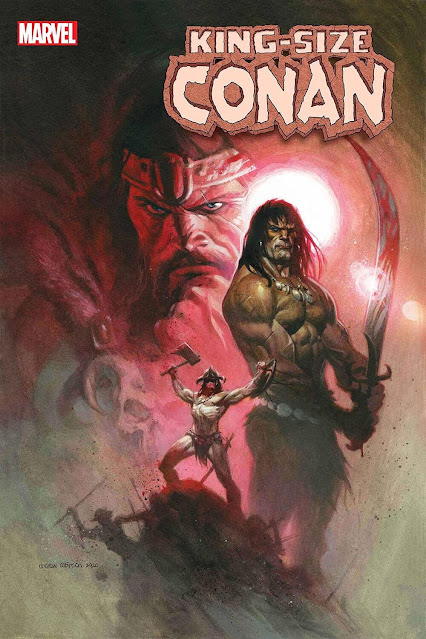 KING-SIZE CONAN #1, cover by Andrew C. Robinson, marks the first Marvel Comics story for both DeKnight (Marvel's Daredevil writer/director/showrunner) and Eastman (Teenage Mutant Ninja Turtles co-creator).
"What I wanted to do is get from the first battle Conan had to a time just a few months later when he met the Aesir, which is really about where CONAN #1 starts," Thomas said to Newsarama. "I thought it would be nice to show what happened just before CONAN #1, at least in my mind, with some nice action along the way." 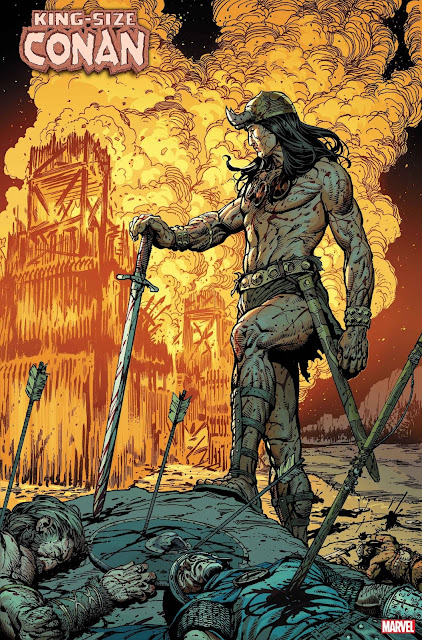 KING-SIZE CONAN #1 interior art by Steve McNiven and Ive Svorcina
"There's some really nice stuff from Steve McNiven," continued Thomas. "He's not slavishly channeling Barry Smith, but there's an approximation that really catches that spirit, and it's really good."
The oversized 50th anniversary special KING-SIZE CONAN #1 features:
All-new prelude to the original Marvel CONAN (1970) story by Roy Thomas and Steve McNiven
A tale of revenge by Kevin Eastman
A turning point in Conan's career as a mercenary by Chris Claremont and Roberto de la Torre
An early brush with sorcerous forces that will shape Conan's destiny by Kurt Busiek and Pete Woods
Conan and Bêlit sail together again for the first time since the 2019 Marvel relaunch in a story by Steve DeKnight and Jesús Saiz 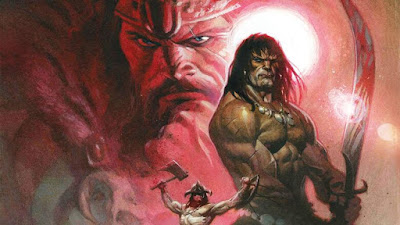 Celebrate 50 Years of Conan the Barbarian Comics with 'King-Size Conan' #1
Preview the works of Roy Thomas, Steve McNiven, Kurt Busiek, Chris Claremont, and more in the oversized special!
In 1970, Roy Thomas brought CONAN THE BARBARIAN, a creation of author Robert E. Howard, to Marvel Comics. With art by the incomparable Barry Windsor-Smith, CONAN THE BARBARIAN #1 introduced the Hyborian Age to a whole new audience, paving the way for decades of comics and Conan’s conquest of pop culture.
Now get ready to celebrate 50 years of CONAN with an oversize special spanning the breadth of Conan’s life and times by the most dazzling array of creative talent ever assembled to tread the jeweled thrones of the Earth!
Experience Roy Thomas and Steve McNiven’s all-new prelude to that original story from 1970! Thrill to a tale of revenge by Kevin Eastman (co-creator, Teenage Mutant Ninja Turtles), writing and drawing his FIRST Marvel story! Chris Claremont and Roberto de la Torre team up to unveil a turning point in Conan’s career as a mercenary! Kurt Busiek and Pete Woods recount an early brush with sorcerous forces that will shape Conan’s destiny! Conan and Bêlit sail together again for the first time since the 2019 relaunch, with Jesús Saiz illustrating the Marvel Comics maiden voyage of Steven S. DeKnight (Daredevil writer/director/showrunner)!
The perfect introduction for new fans, and an essential adventure for die-hards, this is the can’t-miss Conan comic of the decade! Revelations, surprises, and savage action prevail in the all-new KING-SIZE CONAN #1!
"I feel that one of the milestones of my creative life was when I stumbled into acquiring, writing, and editing CONAN THE BARBARIAN (and SAVAGE SWORD OF CONAN)," says Modern Marvel Master Roy Thomas, "so I'm very happy to be writing the character again fifty years later, even just for a ten-page story. Just for a zane, I decided to do a prequel to CTB #1... more a vignette than a story, but bridging the gap between CTB and some retroactive continuity that I added later. Hope people enjoy it... and the art by Steve McNiven should assure that they like looking at it!"
“My love affair with Marvel Comics began before I could read," adds Steven S. DeKnight in an interview with Newsarama. "I used to look at the incredible art and make up my own stories. Now, quite a few lifetimes later, I have the honor of actually writing my own story for the House of Ideas. And not just any story! Conan! Barbarian! Destroyer! King! To say this is a dream come true would be a criminal understatement. I couldn’t think of a more satisfying character to make my debut with between the pages of Marvel Comics. I hope you enjoy this adventure as much as I did!”
"I bought Conan issue #1 off a drug store spinner rack," Kevin Eastman recalls to CBR, "I was eight and it cost me fifteen cents. That was a big chunk of my paper route money in those days and worth every penny. I read it so often the staples barely held it together, which Stan Lee commented on when he signed it thirty years later. As a lifelong fan I was thrilled when [editor] Mark Basso not only invited me to do a cover recently, but to contribute a short story for this collection. I was at once incredibly excited and insanely nervous, as well as grateful they still wanted to publish it after I turned the work in! Thanks for so many awesome memories!"
Sample pages: 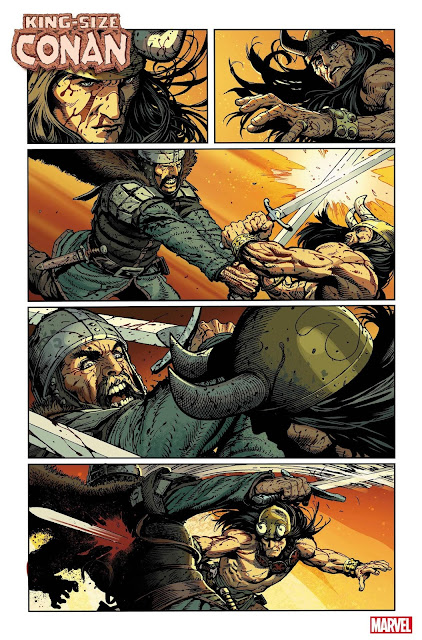 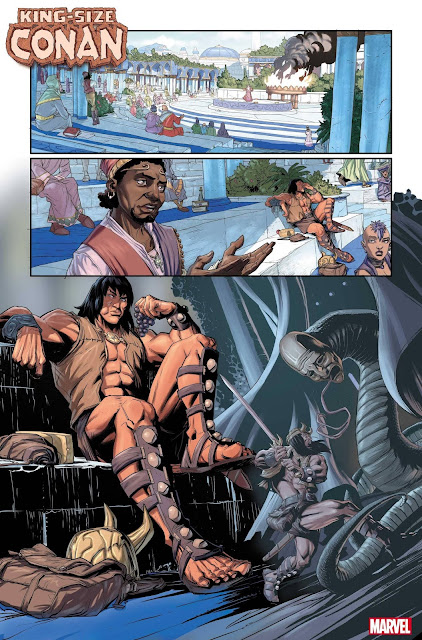 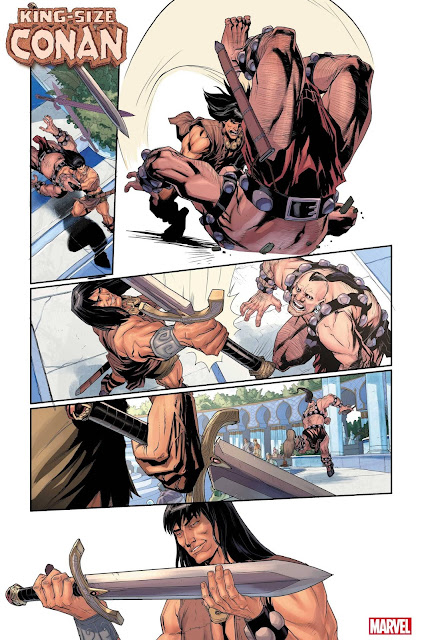 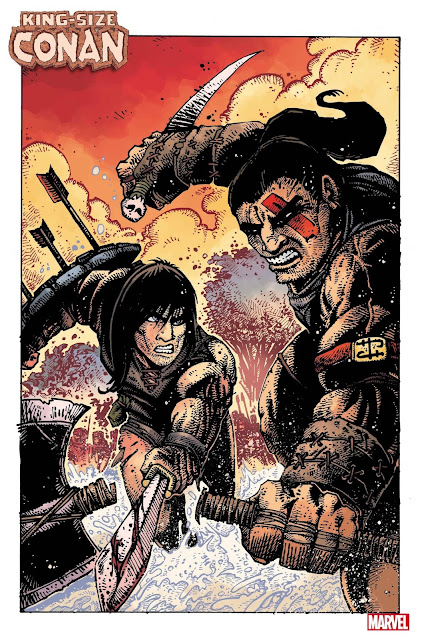 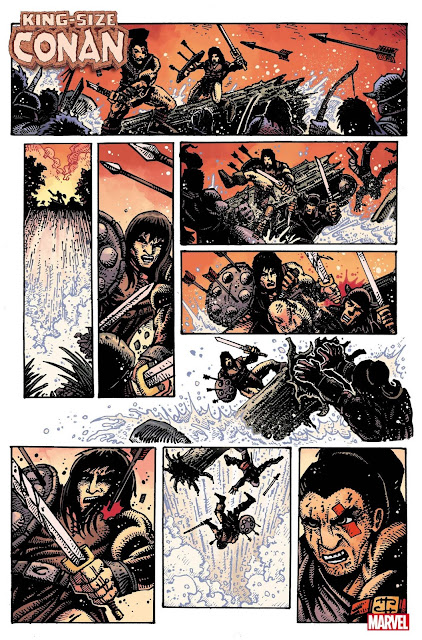 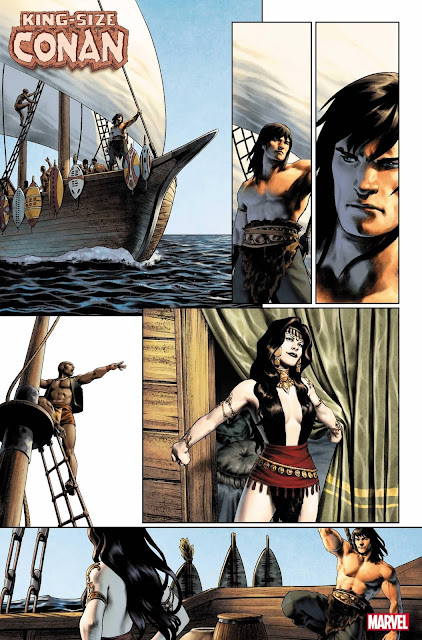 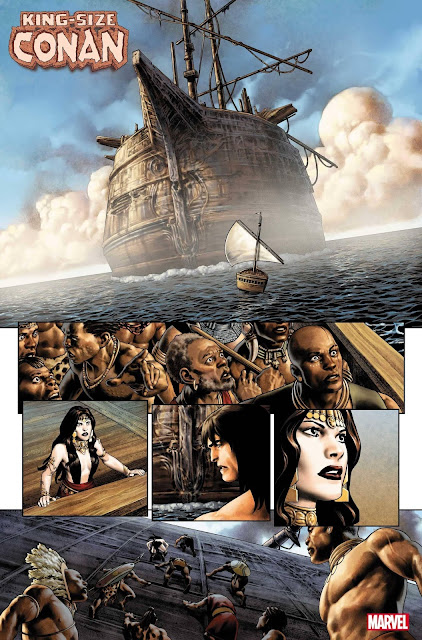 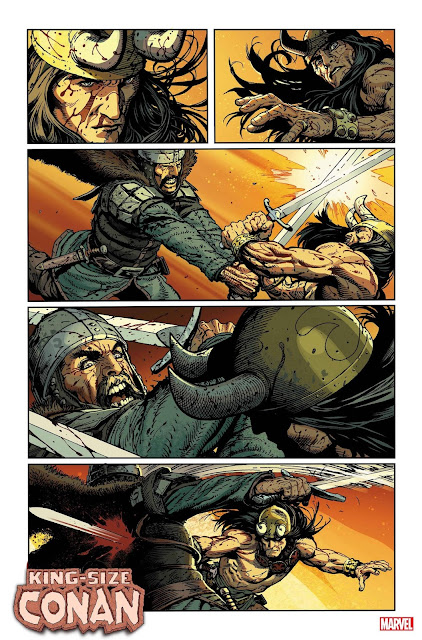 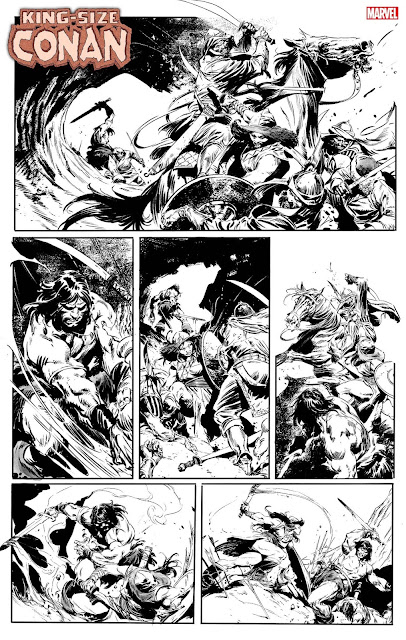 While all of the various covers look good, Buscema’s Conan really stands out.