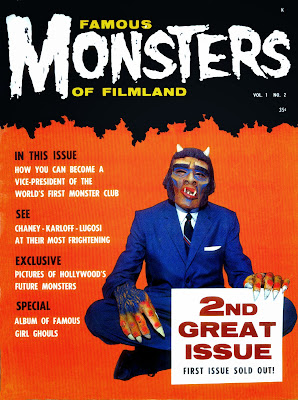 Here is a lot of four masks from the collection of Forrest J Ackerman that was auctioned off after his death in 2009. Of particular note is the mask described as a "Mr. Hyde" mask. Technically, it could be called anything, as the mask has remained a bit of a mystery throughout the years since it first gained recognition after being worn by James Warren on the cover of FAMOUS MONSTERS OF FILMLAND #2 in September 1958. The hands were Topstone's "monster hands", but identifying the maker of the mask is another story.

David Horne, in his indispensable guide to Warren Publications, Gathering Horror, identifies it simple as a "werewolf" mask. Mask-maker Pete Infelise on his blog states that Don Post Studios and Topstone were the two biggest mask-making companies at the time, but neither had this mask listed on their inventory. 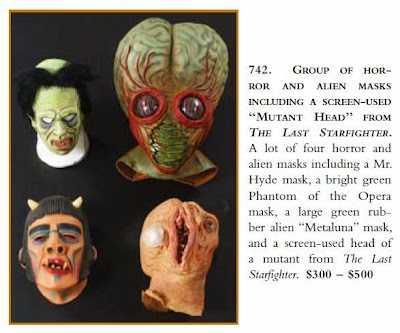 The mask was also sold as an 8" X 10" sutographed  "Werewolf Photo" in FAMOUS MONSTERS. It was smply a black and white photo of the FM #2 cover image.

Years later, in 2005, VXX-FX mask makers payed homage to this mystery mask by creating a likeness of the FM cover mask which they dubbed (maybe more appropriately) the "Devilman".
Posted by: John at 4:00 AM

To add the the mystery of the mask, I'm quite sure that the Devilman that was auctioned off was not the one from the cover of issue #2, but rather, the VXX version. It was gifted to Forry by a west coast mask collector who visited Forry shorty before his passing. Who knows what became of the original?

I have even heard rumors that the original was made of Paper Mache. It's hard to tell from the photo, but the chin does sort of look like paper mache, and not latex. I'm not sure if we'll ever really know the answer unless the original shows up.

Thanks for the update information. Gives more credence to the possibility of this specimen being a "one-off".