"If anything in this life is certain, if history has taught us anything, it's that you can kill anyone." - Michael Corleone in The Godfather: Part II

ON THE NIGHT OF THURSDAY, November 21, 1963, the President of the United States of America, John Fitzgerald Kennedy and his First Lady, Jacqueline "Jackie" Kennedy, nee Bouvier, were in the living quarters of Suite 850 at the Hotel Texas, surrounded by 16 art masterpieces that had been handpicked and installed exclusively for their stay. At $75 a night, the two-bedroom suite was only the second most expensive room in the Fort Worth Hotel; a 13th floor room ran a little more at $100.

The rooms were furnished in the style of "Chinese modern" and, despite the inferred luxury, they were far from ostentatious. Almost out of place, then, were the works of masters such as Franz Kline, Thomas Eakins, Raoul Dufy, Vincent van Gogh, and Pablo Picasso. Whether the President and Mrs. Kennedy appreciated the gesture -- or even noticed them at all -- was rendered meaningless by the events of the following afternoon. Nevertheless, the intention was to help elevate their surroundings into something presumed accustomed to them. After all, the Kennedys -- especially by the grace and haut couture fashions of Jackie -- had brought to the White House, and indeed, America itself, a sense of a considerably higher class style than the previous administrations of Truman and Eisenhower combined. In any event, had these works of art been absent, the overall effect would have likely been an unintentional austerity.

Socially too, the Kennedys upgraded the cultural ambiance of the White House, inviting the types of luminaries never before thought of to bring to the dinner table. Although less flashy, Kennedy himself knew style and beauty when he saw it, especially in his long string of liaisons with the fairer sex. He was also known to enjoy an illegal by his own hand, post-embargo Cuban cigar with any number of fine libations. Once, in a less roguish mood, Kennedy invited a stable of Western Hemisphere Nobel laureates to the White House, where he remarked, "This is the most extraordinary collection of talent ... that has ever been gathered together at the White House, with the possible exception of when Thomas Jefferson dined alone."

Camelot was about to fall, however. The next morning, after a breakfast speech in Fort Worth, Kennedy boarded Air Force One and landed shortly thereafter at Love Field in Dallas. From there, the Presidential motorcade made its fateful journey through the streets of Dallas. When Kennedy's open-top Lincoln Continental entered Dealey Plaza, shots rang out, and America -- the world -- would never be the same.

The question has been asked countless times: "Where were you when Kennedy was shot?" For me, I had just got back into my grade school classroom after recess when my red-eyed teacher told us the news. She said to put our heads down on our desk -- our president had been shot and killed. I was old enough to know death, but too young to perceive what kind of influence that this particular one would have. Instead, the overall effect was a vague sense of . . . violation.

That following Sunday, November 24, millions of numb and still-stunned Americans watched as yet another shocking incident would play out in front of their eyes. Suspected presidential assassin Lee Harvey Oswald was being transferred from the basement of the Dallas Police Headquarters to the Dallas County Jail when another lone gunman stepped out of the crowd and fired a bullet from a snub-nosed .38 into the belly of the accused murderer. Viewers had either witnessed night club owner Jack Ruby avenging our president's death, or had just taken part in one of the greatest cover-ups in American history. Television's NBC had the dubious distinction of filming the action as it happened, thus becoming the first network televised broadcast to a live audience of someone being killed.

The Warren Commission was appointed by then-President Lyndon Baines Johnson to unravel the Keystone Cops-like evidence-gathering and eye-witness accounts and to make some sense of what had happened. Their "rush to judgment" concluded that Lee Harvey Oswald was solely responsible for the unholy act. Meanwhile, Jack Ruby sat in a prison cell, slowly rotting and taking any secrets he may have had to the grave. He pleaded to explain his actions to the Warren Commission, but they were mysteriously silent on the matter. He died on 3 January 1967 at Parkland Hospital of a pulmonary embolism, still trying to tell his side of the story. Ironically, this was the same hospital where just a few years before, President Kennedy had been pronounced dead and where Lee Harvey Oswald had succumbed to his gunshot wound a day later.

The people and events that make up the fabric of today's so-called "conspiracy theories" regarding President Kennedy's assassination are legion. Like most conspiracy theories, it draws into its web unaccounted for information, coincidental events, and anything else within six degrees or more of separation that has a hint of relational consequence. In this case, however, the official investigation crumbles under close scrutiny, ultimately bringing up enough unanswered questions to create an effect opposite of what its conclusions were intended to convey.

Perhaps the most famous of all evidence that has the capacity to refute the steadfast Warren Commission are the 486 frames of 8mm film called the "Zapruder film". Frame 313 shows the fatal headshot to the president where it appears like it had been fired from a location in front of him rather than from the Book Depository above and behind him.

Other holes or missing pieces in the evidence have made it easy for the architects of popular culture to doubt the authenticity of the so-called "official word" regarding Kennedy's assassination. Examples include obsessed Norman Mailer, who wrote a book about Oswald's life, and Stephen King followed years later with a time travel novel that takes the readers back to that day as only Stephen King can. In between, a storehouse of articles, books and even major motion pictures have attempted to supply the real reason behind the despicable act and provide to the American public some well-deserved closure.

But here we are, fifty years later, and many of us are still asking the question: Why? The post-war American Dream evaporated at about 1:00 pm CST on November 22, 1963. Afterwards, LBJ opened the bloody floodgate on a Vietnam conflict that Kennedy was aiming to stop; civil unrest proliferated until at one time, hundreds of incidents connected with the counterculture, political extremists and citizen rioters, were occurring every day; and the sexual and drug revolutions told us to "Tune in, turn on, and drop out", but instead we eventually "Tuned out, turned violent, and dropped dead" from drug overdoses and AIDS. The personality -- no -- the soul of America pivoted from a promising future to an unknown and unsure destiny.

We can't blame John Kennedy for these still-livid scars on our country, we can only suspect that it is the three-headed monster of corruption, power and greed that caused them. Will then, the true face of this human monster -- or monsters -- behind the death of President Kennedy ever be revealed? 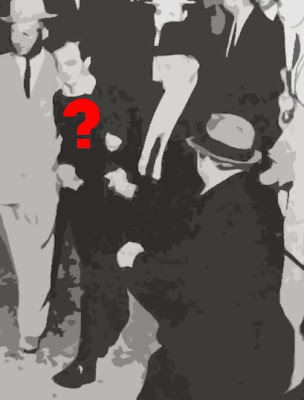