'I WATCHED THEM EAT ME ALIVE!' REVIEWED 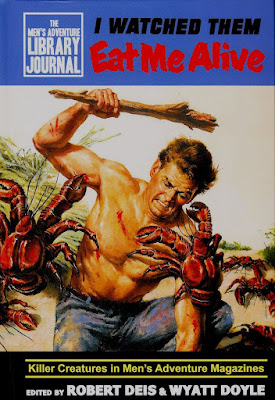 "I lost both hands to the wrists, a slice of my left buttock, and most of my scalp. And the vision of my right eye. That, too. There were a thousand deaths on Arnhem Land but ours was the worst. Not even a cannibal stew pot could quite compare with it."              - Flying Rodents Ripped My Flesh by Lloyd Parker

My first "exposure" to men's adventure magazines, besides seeing them tucked in the magazine rack at our local liquor store (hey, they had comics there, too!), was at my friend's house across the street. His uncle was living there at the time, and, along with the PLAYBOYs on his nightstand was the odd assortment of men's adventure magazines. With their colorful cover imagery and titles like STAG (what was that?) and the forbidden-sounding FOR MEN ONLY, it was hard for us to resist taking a peek at them whenever said uncle was absent from the household.

Even this 10-year old's near-zero knowledge of the topic could see that, while the "girlie" photos that were sprinkled throughout these magazine were hardly up to to the quality of PLAYBOY, the other stuff that was in them was an entirely different story. Here were full page and two-page spreads of illustrations, many strangely tinted with a dull, pumkin-y orange color (that I would later recognize as a duo tone illustration technique), depicting various scenes of women in bed, in peril, etc., all showing just enough to raise this youngster's temperature as much as the fold-outs in PLAYBOY. What added to the thrill was that many of these illustrations were battle scenes with soldiers in dramatic action poses alongside more women in island sarongs -- or what was left of them. The combination of the girlie magazines and these others, together with my friend's growing collection of monster magazines, always left me with a mixed-up mental panoply of pop culture craziness!

Fast-forward 40 or so years later, to the present, where these very same men's adventure magazines, after morphing in the '80s into the burgeoning "skin mag" industry, enjoy a resurgence when several collections of the covers, stories and illustrations are made available.

Now, editors Robert Deis and Wyatt Doyle lead the charge in offering readers a first-hand glimpse into the violent, bloody, tawdry and sexy stories that were contained in the pulp magazines designed for red-blooded males that flooded the magazine racks with dozens of titles in liquor stores and newsstands for well over a decade.

Collected in their latest "Men's Adventure Library Journal" are tales of killer animals, beasts and creatures from air, land and sea, all with the fury, blood-lust and appetite for human flesh. What makes these stories extra shocking (and entertaining) is that the creatures attack without warning, without reason and are willing to fight to the death to obtain their next meal.

It is a current assumption that men's adventure magazines (MAMs) predominantly contained stories about Nazi sadists and Imperial Japanese devils. But stories about animal attacks were more numerous, and many times, more terrifying. In his introduction, Deis explains: "Most animal attack stories in MAMs -- including those that may initially seem like they'd be 'funny as hell' -- are dark action/adventure tales and bloody as hell. In most cases, they are essentially horror stories."

Doyle opines: "Their horror [animal attack stories] is rooted in primal impulses, rational and irrational fears, and phobias of animals both large and small."

So, what we have here is a collection of the '50s version of When Animals Attack, only served up with a dose of adrenaline-fueled bloodletting and mutilation. The stories are unapologetic and unbridled, and once you start reading them you can't put this book down -- sort of like the text version of driving by a car wreck on the highway.

The line-up of both warm-blooded and cold-blooded killer critters run the gamut from crustaceans, snakes, gorillas, wolverines, and squirrels (!). Included are several picture portfolios that always added to the allure of the story they illustrated.

Obviously inspired by the most famous animal attack story of all time, "Weasels Ripped My Flesh", I WATCHED THEM EAT ME ALIVE is essential reading for both the connoisseur and curious who are seeking a few hours of monster mayhem from the golden years of men's adventure magazine. Messrs. Deis and Doyle have skillfully assembled a generous dose of classic animal attack stories that entertain as well as having the capacity of chilling your blood... that is, if the killer creatures have left any of it.

This super-entertaining book is available at Amazon or through Mr. Deis's fabulous blog, MensPulpMags.com. 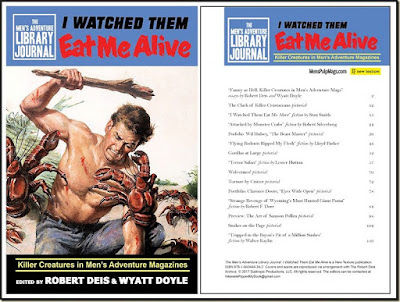 Email ThisBlogThis!Share to TwitterShare to FacebookShare to Pinterest
Labels: I WATCHED THEM EAT ME ALIVE, IT CAME FROM THE MEN'S MAG, ROBERT DEIS, WYATT DOYLE

John -
What an honor and pleasure it is to get a review like that from you. Thanks! Love your blog!
- Bob Deis
Co-Editor of I WATCHED THEM EAT ME ALIVE

My pleasure, Bob! Your series, and this one in particular, IMHO, is the best and deserves recognition. Hey, monster lovers, don't forget to check out Bob's boss blog, MensPulpMags.com where you can find all sorts of critters and creatures!

Thanks again, John. BTW, I just mentioned your review in my latest blog post on www.MensPulpMags.com and posted a graphic with some of your quotes about our new book. Cheers! 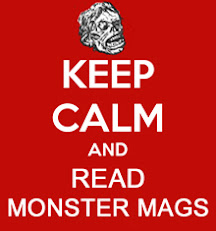 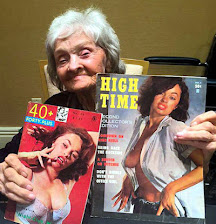