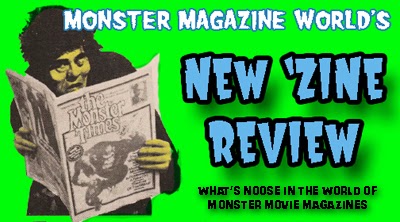 "In those days, nobody was thinking of a legacy." -- William Friedkin on The Exorcist

GOSH, IT SEEMS HARD TO IMAGINE that it's been 40 years since I stood in a line that snaked around the block, waiting for the movie at a Westwood, CA theater that would later become known as "The Scariest Movie Ever Made". After all these years, just thinking about some of the scenes from that film evoke a time-diluted, but nevertheless still-present frisson of dread. I think you would agree that very few other films from that long ago or longer -- if any -- still have that kind of power. Consequently, I do not hesitate when I say that THE EXORCIST (1973) is, for me, the most frightening movie I've ever seen.

It seems only natural then, that two of the premier commercially-printed monster magazines devote a substantial page count to it. And, after years of magazine articles, movie reviews, and volumes of criticism, there is still more to be discussed about the movie that shakes many people to the core of their spiritual beliefs, and challenges their reluctance to accept the concept of evil.

Chris Alexander's FANGORIA #329 begins its celebration of the recent 40th Anniversary Blu-ray release of THE EXORCIST in typical style with a front cover photo of the possessed Regan staring balefully at the reader, soaked in her infamous "pea soup" vomit. Alexander comes from THE OMEN generation, but he nevertheless fully acknowledges the importance  of THE EXORCIST in cinema history and its impact. Shade Rupe's interview with Director William Friedkin is the centerpiece of the issue. The chapter on THE EXORCIST in Friedkin's recently published autobiography is titled, "The Mystery of Faith". During the interview, Friedkin explains this concept and how it influenced the making of the film: "People have been, over the centuries, willing to give up their lives for these [religious] teachings. We will never have a personal experience of them, yet they come to us and we absorb them, and often we find ourselves following them. That, to me, is the mystery of faith, and it joins all the other mysteries of the universe." He goes on to say that we are "fascinated by something we have little or no evidence of, but that we continue to seek. I find faith to be an eternal mystery."

Also discussed is lost and recovered footage from the film over the years, as well as the recent film festival showing of his director's cut of SORCERER, starring Roy (JAWS) Scheider, which has so far played to exuberant  SRO audiences (it will be available on DVD in April of this year). Mention is also made of the notorious "ripped from the headlines" gay serial killer thriller, CRUISING, starring Al Pacino, which FANGORIA intends on expanding on in a later issue.

Included are a number of other interesting articles and features that FANGORIA can be counted on in each and every issue. For example, I was surprised to learn that producer Steven-Charles Jaffe is filming a documentary on the master of graveyard humor and long-time PLAYBOY cartoonist, Gahan Wilson. There is a short essay, Where are the Wolves?, by Craig Anderson, lamenting the short-shrift that our canine cousins have been getting in the media over the years. It was also nice to see Bill Mohally recognized for his many years of work behind the scenes as art director for not only FANGORIA, but also for his days at Warren Publishing. Mohally is largely responsible for "the look" of FANGORIA, and has been since issue #27. Greg Nicotero, genius makeup artist and producer of the hit TV series, THE WALKING DEAD, Night of the Living Dead author John Russo, and OMEN II's Elizabeth Shephard are all interviewed in yet another issue of FANGORIA that's brimming with enough meat for any monster to sink it's teeth into.

"I painstakingly almost made it as a documentary of the actual 1949 exorcism case that occurred in Silver Spring, Maryland, that involved a fourteen-year-old boy." -- William Friedkin on THE EXORCIST

The other Alexander -- David -- and his magazine, RUE MORGUE, take a similar track in issue #140, by also interviewing director William Friedkin for a 40-year take on THE EXORCIST. Freidkin expounded on the idea of the continuous battle of good against evil and it's unconscious effects on society and faith. He also spoke aboit the opening sequence of the film, and how it was nearly cut out. I, for one, am thankful, because that is one of my favorite scenes in the movie. "They wanted to drop it back then," Friedkin explains. "Even Blatty's own publisher wanted to cut the prologue from the novel because they didn't understand it. Warner certainly didn't want me to film it , let alone travel to Northern Iraq to film it. I decided to shoot it because I felt that sequence set the whole mood and tone of the film with very little dialogue. It acts as a portent or forewarning of Merrin's future -- and ultimately fatal -- confrontation with the demon, and also establishes this overriding sense of a mystical, eternal evil." Freidkin also dispels the so-called "curse" surrounding the making of the film. He acknowledges that some strange things occurred, but says he had nothing to do with hyping the film in this way. He names actress Helen Burstyn as among the perpetrators, however.  After a showing at the Smithsonian last October, as well as its induction in the U.S. Library of Congress, Blatty and Friedkin's THE EXORCIST will be preserved for generations. Makes one wonder if the Devil made them do it?

Included in this issue is a feature on the making of a bit of an unrecognized horror gem, THE SERPENT AND THE RAINBOW (1988). I have watched this film numerous times, and while in several places it strays from the original (the bad guy character played by Zakes Mokae is not in the Wade Davis non-fiction book, for instance), it nevertheless tells a gripping story. Director Wes Craven relates the sometimes harrowing adventures that the actors and crew had trying to get this movie filmed. For example, they had to flee Haiti to the Dominican Republic or be overcome by a mob who obviously didn't care who they were and what they were doing. The practice of Voodoo, it seems, is still a powerful religion, as well as a political tool.

This latest issue of RUE MORGUE is filled out with its other features and columns that make it one of the "go-to" monster mags for the latest 411 in fear.

It's hard to compare the two magazines, and there is certainly not one that is better than the other in terms of overall quality. FANGO is a bit pricey at $10.99, but has about 20 more pages than RUE MORGUE. RM uses heavier stock paper, but FANGO boasts more content. Either way you slash it, I recommend either -- or both -- of these magazines for a double-dose of monster goodness.
Posted by: John at 7:20 AM

JOIN THE CULT OF MONSTERS